“There was a tangible thrill in the auditorium as the lights faded before the interval. ...This was a polished production by Judith Roberts.”
BBC website

“From the stage’s unadorned bareness, to the actors’ refined performances, to the sensual naturalness of Mererid Hopwood’s adaptation, this was a dignified and polished production.” Golwg

"...A glass of wine spilt on the white tablecloth, which was then wrapped in, and embraced by Bernarda. It talked about the sexual destruction of her family by herself - she’s destroying their capacity to be sexual women by her insistence on their observation of mourning (which is a sort of wild expression of her own indignation and anger at the life she’s had to lead). And suddenly, the spilling of the wine onto the white tablecloth and her embrace of that was an extremely rich image of taking again to herself the virginity which the daughter had lost and ....was it a reclamation, was it a denial? ... of her own sexual nature. That occurred right at the end. It was a very unexpected place to put such a powerful, suddenly physical, image. But, theatrically, it worked. And I thought that was a hell of a way to end that production.”
Roger Owen, Critic and Academic 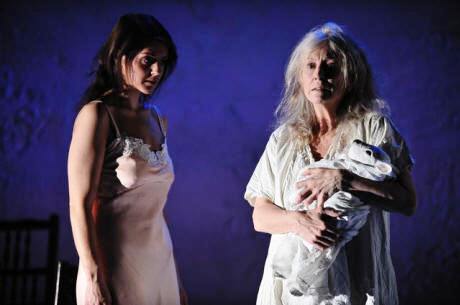